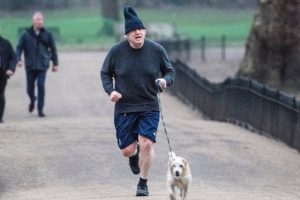 Dr Mary Ramsay said grounds for hope that vaccination may achieve the holy grail of halting community transmission were emerging from new studies.

“What we don’t yet know is how long that might last and whether or not that will be enough to stop the infection spreading more widely in the population over time,” she told Radio 4’s Today on Tuesday

“But there’s really very good signs that this is going to at least reduce infection rates across the population, and hopefully … prevent people passing it on almost completely if they’ve been vaccinated fully.”

If the hopes are fulfilled, it will be the most spectacular success yet for the British vaccination roll-out — and a huge boost to the Prime Minister’s roadmap to recovery from the pandemic.

France overnight abandoned president Emmanuel Macron’s widely-condemned criticism of the Oxford/AstraZeneca jab — and reports from Germany said chancellor Angela Merkel was poised to lift her embargo on the same dose being given to over-65s.

Both leaders have been embarrassed by how well the vaccine has performed in reducing hospitalisation and deaths in elderly people, especially Mr Macron who was lambasted by scientists for alleging without any evidence that the Oxford jab appeared “quasi-ineffective on people older than 65.”

The European Union’s much-vaunted solidarity on vaccination was crumbling as Britain held its runaway lead on the roll-out, which has so far succeeded in dosing 20 million UK residents.

Austria and Denmark revealed they have decided to forge a new partnership with Israel to obtain vaccine supplies outside the European Union programme. Austrian chancellor Sebastian Kurz told Bild that the European Medicines Agency was “too slow” to approve vaccines and added: “We should no longer be dependent only on the EU for the production of second-generation vaccines.”
Slovakia purchased two million doses of the Russian Sputnik V vaccine, making it the second country in the EU to invest in the Moscow export that has not been approved by the European Medicines Agency, reported Politico.
Polish president Andrzej Duda raised the idea of buying the Chinese vaccine in a telephone conversation with the president of China, Xi Jinping, an official readout of their call disclosed.
Business Secretary Kwasi Kwarteng played down suggestions made by Boris Johnson that Britain could host additional Euro 2020 matches this summer thanks to the success of UK vaccination in driving down infections. The tournament is due to be hosted across 12 different countries, with the semi-finals and final to be played at Wembley. Responding to Mr Johnson’s offer to host more games, Mr Kwarteng said: “I don’t want to run ahead of ourselves.”
Secondary school re-openings are likely to be “staggered” as pupils retake Covid-19 tests before returning to the classroom, Geoff Barton, of the Association of School and College Leaders, told BBC Breakfast. He said primaries will likely feel “pretty normal” next week.
A study is to investigate the effectiveness of Covid-19 vaccinations in protecting patients with certain immunosuppressed conditions, including cancer and inflammatory arthritis.
Health Secretary Matt Hancock boasted at last night’s No10 press conference that the £3 Oxford dose may be “slightly more effective than the Pfizer vaccine” which costs five times as much, after real-world studies.

Dr Ramsay said positive signs that jabs may stop spread had come from a study of health workers where a single dose of the Pfizer jab “reduced infection, regardless of whether people had symptoms or not” and from a separate study at Cambridge.

A PHE study showing they dramatically reduce hospital admissions in over-80s could also see encouraging results for other age groups, she said.

Professor Devi Sridhar, of the University of Edinburgh, said the data on the coronavirus vaccines were “better than any of us could have imagined” and called for a celebration of the science when things have returned to normal.

“This is world-changing in terms of having these vaccines as a way out of this pandemic,” she said.

Real-world data on the effectiveness of the Oxford and Pfizer vaccines is “stunning” and countries across Europe will take note, said Professor Andrew Pollard, director of the Oxford Vaccine Group which developed the £3 jab.

“First of all, because these data come from the hardest group to protect — those who are the frailest, the oldest adults in our population — and we’re seeing an 80 per cent reduction in hospitalisation in that group, which is stunning,” he said.