Post Desk : A Cabinet minister today braced parts of Britain for tougher restrictions less than 24 hours after the three-tier system to combat Covid-19 was unveiled. 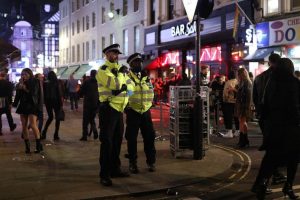 Communities Secretary Robert Jenrick urged leaders in cities such as Manchester to agree to stricter social distancing clampdowns if needed to stop the epidemic spiralling even further out of control. However, as he issued the appeal:

The Government was accused of acting too slowly and doing too little after it emerged that Sage (Scientific Advisory Group for Emergencies) had advised a “circuit breaker” series of strict measures more than three weeks ago to try to stop the disease spreading so fast.

Andrew Hayward, professor of infectious disease epidemiology at University College London who attends Sage, said a “circuit break” style lockdown would have been a “proportionate” way of getting a grip on the virus while avoiding “intensive and long-term lockdowns later”.

Mr Jenrick stressed the Government was seeking to balance “robust” action to fight the virus with steps to protect as many jobs as possible and keep open schools, colleges and universities.

With MPs due to vote on the new restriction system, Boris Johnson faced a backlash from some Tories who fear the economic harm being done to the country by the restrictions is too great.

London was still likely to be put into Tier 2 measures, meaning a ban on social mixing between households indoors, if the epidemic continues to worsen in the city. Mayor Sadiq Khan said London’s Tier 1 level could change “very quickly, potentially even this week”.

People were still having to wait days for Covid test results, with Sage saying the test-and-trace system was having only a “marginal” impact on reducing the disease’s spread.

Official figures showed 321 people with coronavirus died in the week to October 2, up from 215 in the previous seven days. In London, the death toll increased week on week from 23 to 31.

Mr Jenrick praised civic chiefs in Liverpool after a package of measures was agreed for the city to become the first Tier 3 area. “I hope that should we need to go further, we don’t today, in other places like Greater Manchester, like Nottingham, that we will have the same approach with their local leaders,” he told Sky News.

With the North West, North East and Midlands seeing the biggest Covid outbreaks, the Cabinet minister said no other areas were set to go into Tier 3 this week.

However, he added: “What we want to do now is work with local leaders to make difficult decisions where necessary in those communities and to consider going further if we have to.”

At last night’s Downing Street press conference with the Prime Minister and Chancellor to announce the new system of restrictions, the chief medical officer Chris Whitty warned that the baseline measures in Tier 3 may not be enough to stem the relentless rise in Covid cases in some parts of the country.

The baseline bans social mixing indoors and in private gardens, with the rule of six allowed in open public spaces such as parks and beaches.

Pubs and bars must close, and can only stay open if they operate like a restaurant, serving “substantial meals” to customers, with alcohol only allowed to be served with the meal. Mr Jenrick said a “substantial meal” could be a cornish pasty with chips or salad.

People are advised not to travel in and out of these areas.

However, Professor Whitty said last night that he was “not confident” that the “base case” for Tier 3 proposals “would be enough to get on top of it”. Additional measures could include closing gyms, casinos, and leisure centres.

The Sage document on a “circuit break”, dated September 21, said a package of interventions was needed to reverse the “exponential” rise in cases.

The paper set out a shortlist of non-pharmaceutical interventions that should be considered for “immediate” introduction. Top of the list was a short period of lockdown known as a circuit-breaker “to return incidence to low levels”, followed by advice to work from home for all those who can.

Third on the list was “banning all contact within the home with members of other households (except members of a support bubble)”, and fourth was the closure of all bars, restaurants, cafés, indoor gyms, and personal services such as hairdressers.

The final measure was that all university and college teaching has “to be online unless face-to-face teaching is absolutely essential”. At the time, universities were returning for the new academic year.

The document says both local and national measures were needed, adding: “Measures should not be applied in too specific a geographical area.” Shadow health secretary Jonathan Ashworth said: “The Government now needs to urgently explain why it ignored its own scientists and what it will be doing to get control of the virus.”

A government spokesman said: “We took robust but targeted and proportionate action in September, including introducing the rule of six, restrictions to hospitality opening hours, and advice for people to work from home where they can, alongside tougher enforcement.”