Post Desk :  The UK has reported another 137 coronavirus deaths taking the total to 43,155, according to government figures. 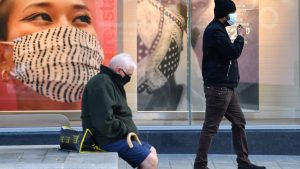 Separate figures published by the UK’s statistics agencies show there have now been a total of 58,500 deaths registered in the UK where COVID-19 was mentioned on the death certificate.

The daily number of deaths on Wednesday was slightly down from the 143 recorded on Tuesday – the highest daily figure since June.

Separate figures show there were 4,146 Covid-19 patients in hospital in England as of Wednesday, up from 2,944 a week ago.

The numbers show 468 of the coronavirus hospital patients were in ventilation beds, up from 376 a week ago.

A total of 647 patients with confirmed COVID-19 were admitted to hospitals in England on Monday, compared with 472 a week earlier.

The latest figures come as parts of England are facing fresh restrictions under the UK government’s three-tier local lockdown system, with Liverpool under the toughest restrictions.

The figures show the number of COVID-19 patients who were admitted to hospital on Monday – the most recent daily figure available – is the highest in the North West, with 216 admitted.

It was followed by the North East and Yorkshire region which saw 167 admitted.

Both regions have the highest number of patients already in hospital with the virus; 1501 and 1057 respectively.

The East of England has the lowest figures with 24 people admitted on Monday and 175 in hospital.

It comes as the Welsh first minister announced a ban on anyone living in areas with a high prevalence of COVID-19 in England, Scotland and Northern Ireland entering Wales.

It is set to begin a four-week “circuit breaker” lockdown from Friday.