The French president describes it as a “cowardly attack”, saying the man was killed because he “taught the freedom of expression”.

Post Desk : The teacher killed in a suburb of Paris in an Islamist terror attack has been named as Samuel Paty, Sky News has confirmed. 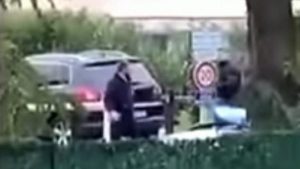 The history teacher, who is said to have discussed images of the Prophet Muhammad with his pupils, was beheaded.

The suspected attacker was shot dead about 600 metres from the scene, according to the AP news agency.

According to Le Parisien newspaper, the attacker was an 18-year-old man of Chechen origin, who was carrying a knife.

French anti-terror prosecutor Jean-Francois Ricard said the suspect, who had been granted a 10-year residency in France as a refugee in March, was not known to intelligence services.

He added that a text claiming responsibility and a photograph of Mr Paty were found on the attacker’s phone.