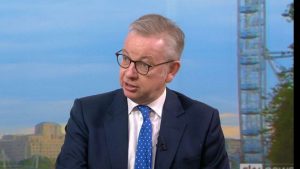 The government is currently in a stand-off with Mr Burnham over whether his region should be moved into the highest alert level of the new three-tier system for local coronavirus lockdowns.

Before agreeing to tougher Tier 3 restrictions, Mr Burnham has called for greater financial help for firms that would be affected by the move, which would see bars and pubs closed – and likely a number of other businesses.

Amid an increasingly bitter political row, Mr Gove, the Chancellor of the Duchy of Lancaster, risked further inflaming tensions between ministers and the Greater Manchester mayor.

“I want them to put aside, for a moment, some of the political positioning that they’ve indulged in. And I want them to work with us in order to ensure that we save lives and protect the NHS.

“All of this is happening as we move closer to the winter and instead of press conferences and posturing, what we need is action to save people’s lives.”

Mr Burnham, a former Labour MP, later hit back at Mr Gove and refuted the suggestion he is “playing politics”, as he pointed to the fact Greater Manchester was the first part of the country to accept localised COVID-19 restrictions at the end of July.

The mayor revealed he was due to hold a call with Sir Edward Lister, the prime minister’s chief strategic adviser, on Sunday afternoon.

And he accused Boris Johnson of having exaggerated the severity of COVID-19 infections in Greater Manchester.

“It’s a serious situation but I don’t think it was the situation that was described by the prime minister on Friday evening,” he told the BBC’s Andrew Marr Show.

“I think it was an exaggeration of the position that we’re in.

“Of course it’s a matter of concern, and we watch the figures very closely indeed, but the figures have been falling in Manchester itself in the last few days, across Greater Manchester up slightly but certainly not doubling every nine days.

“So let’s be careful here. I would certainly say this morning let’s step back a bit from a war of words.”