Post Desk : James Bond star Naomie Harris feared she was about to be attacked and was left “absolutely petrified” and gasping for air when she was targeted by an obsessed stalker. 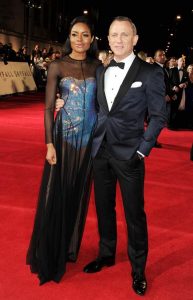 The Oscar-nominated actress, who plays Miss Moneypenny, “felt the blood rush from her” and suffered a panic attack when farm labourer Ii Ovisyonairo Ii tracked her down to her north London home.

Wood Green crown court heard Harris, 44, “genuinely felt he was going to try and come inside the house and hurt her”.

Prosecutor Philip McGhee revealed: “She doesn’t feel safe when she goes out and struggles to sleep. She is going to be looking over her shoulder until she knows the defendant can’t hurt her. She is genuinely petrified about what he might do to her and doesn’t feel safe even when she comes home.”

Ii, 37, had tried to contact a string of famous women when he turned his attention to Harris, vowing to “present his soul” to the star in a deluge of sexually charged love letters around Valentine’s Day. He initially tried to get to the actress through her mother, Carmen, insisting Harris was “the one”, and had saved the star’s address in his Sat Nav as “home”, the court heard.

“She was incredibly scared and shocked by this,” said Mr McGhee, describing the moment Ii arrived at Harris’s door. “She was absolutely petrified, she says she felt out of breath and felt the blood rush from her.”

Harris said the stalking campaign left her “shocked and shaking”. She has now changed the locks to her home, fitted a new security alarm, and asks taxi drivers to wait until she has reached her front door.

The Cambridge-educated actress was a child star and has appeared in Hollywood hits including Miami Vice, Mowgli, 28 Days Later, and the Pirates Of The Caribbean series. She will appear alongside Daniel Craig next year in the Bond film No Time To Die.

The stalking began when Ii booked Reiki sessions with her mother and turned conversation to Harris in the hope of being introduced. In a string of messages, Ii revealed he had been monitoring the actress’s media appearances and wanted to meet her on November 11 last year — a date he “hoped would become their anniversary”.

“He believed there was a fated aspect to do with his path crossing with that of Naomie Harris,” said Mr McGhee.

Ii found Harris’s home address and sent an 11-page “heavily fragranced” letter on red paper on February 13, declaring that he was “fond of her and she was the one”, the court heard.

More letters, littered with “highly sexualised” references, arrived over the next week with promises to “pursue her until she acknowledged they should be together” and “travel to London to present his soul to her”. Harris was on the phone to a friend when Ii arrived at her home on February 29. “Her friend described Harris dropping her voice, whispering in a terrified tone that the man who had been stalking her was at her front door,” added Mr McGhee.

When captured at the farm near Canterbury where he was living, police discovered Ii had passports in different names, women’s clothing, a dossier on Harris, and letters from other famous women rebuffing his advances. “There seems to be clear evidence that Mr Ii has had a fixation on other women, glamorous women, women in the media, in the past,” said Judge Noel Lucas QC. “He frightens me.”

Ii, who changed his name by deed poll and was known to friends as Christian, has been diagnosed with Asperger’s Syndrome and is “shy and can’t communicate with women”, the court heard.

He apologised to Harris in a letter to the court, saying he was “ashamed of his actions” and that he would not repeat them.

He admitted two stalking charges against the star and her mother and will be sentenced on Friday.