Post Desk : More than a third of doctors believe the government’s three-tier system will have no impact on efforts to contain the spread of COVID-19. 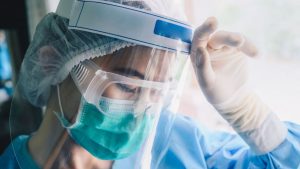 The research from the British Medical Association (BMA) also raises concerns about the autumn and winter period – with more than half of healthcare staff saying they are “quite anxious” about what is to come.

More than 6,000 doctors took part in the survey. While 60% said they are worried about their own health, 65% said they are fearful of staff shortages in the coming months.

When asked to what extent the new tiering system in their local areas would contain coronavirus, 37% said they believe it will have no impact or would be ineffective.

Advertisement
Less than half of those surveyed – 46% – think this approach could work to a slight extent, and just under 6% said it will work to a significant extent.

The BMA’s chairman says the results indicate the “enormous scale of the challenges” faced by the NHS in coming months.

Dr Chaand Nagpaul said: “Doctors know that this winter is likely be one of the most difficult times of their careers.

“They are extremely worried about the ability for the NHS to cope and their ability to care for the needs of their patients.”

The BMA said it wants the government to be “both honest and realistic with the public about whether the NHS can cope with routine care and COVID care this winter”.

Dr Nagpaul said: “Large numbers of doctors across England have little faith that the government’s current ‘tiered’ based lock-downs will have any significant impact on controlling the virus.

“Instead of a few short weeks of suppression, bringing economic and emotional misery for those in the areas affected, we need a national prevention strategy that has a lasting impact and gets growing infection rates under control across England.”