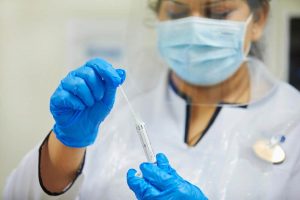 The £120 test should be available on the high street within two weeks, the retailer said. The swab test has proved 97 per cent accurate in trials.

The service is available as a private pre-flight test for customers who require one before travelling abroad, or as a solution for those who would prefer peace of mind before seeing friends and family.

The chain is also launching a 48-hour service from today and hopes 200 branches will offer tests by Christmas across the country.
Chief executive Sebastian James said the devices were the first step towards mass testing on high streets and will help ease the pressure on the NHS.

He said: “We believe we are the cheapest private test. We think it is pretty good value compared to others on the high street, which range from £270 at the very expensive end to about £150 in online clinics.

“Once it becomes more accessible in terms of cost it could be a very important weapon in the armoury against Covid.”

He added: “We hope that by offering this testing option in local community stores, Boots can help ease pressure on the NHS and the Government by providing additional access to testing and crucial reassurances for people across the UK.”

Customers can book the Boots test through an online app. Tests are administered by staff in private rooms.

The equipment connects to a cloud system, which could potentially allow for speedy tracking of disease outbreaks by health authorities.

The technology has been developed by UK-based life sciences company LumiraDx, which has also struck a deal to provide supplies to the NHS in Scotland.

The test, which detects the presence of a Covid-19 antigen protein, is said to be considerably faster than other rapid tests currently being trialled, which produce results in an average time of 90 minutes.

It was revealed on Sunday that contacts of people infected with coronavirus may have to self-isolate for as little as seven days amid concerns in Whitehall about the levels of public compliance with the Test and Trace system.

Officials on the Government’s Covid-19 taskforce are understood to be examining the case for reducing the current fortnight period of isolation to between 10 days and a week.

The move, which would not apply to those who test positive for the disease, comes amid growing dissatisfaction with the performance of the system from ministers and MPs.

Anyone who suspects they have Covid-19 is advised to go to an NHS testing station, where results are expected in 48 hours.

Currently, anyone who tests positive for coronavirus is told to self-isolate for 10 days. Others that live with someone who has symptoms – or if they’ve been contacted by Test and Trace – must self-isolate for 14 days.