Post Desk : Former Labour leader Jeremy Corbyn has been suspended from the party after refusing to accept the findings of a bombshell report into anti-Semitism during his tenure. 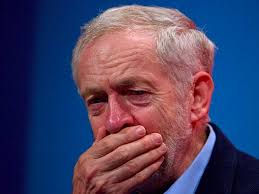 On Thursday the Equality and Human Rights Commission found the party was responsible for unlawful acts of harassment and discrimination.

The investigation found evidence of “political interference” by Mr Corbyn’s office in the complaints process.
However, Mr Corbyn said he did not accept all the EHRC’s findings and insisted he had improved the process for handling anti-Semitism complaints.

The former leader also claimed the scale of the problem had been “dramatically overstated for political reasons by our opponents inside and outside the party, as well as by much of the media”.

Current Labour leader Sir Keir Starmer later appeared to rebuke Mr Corbyn, although did not refer to his predecessor by name.

Responding to the report he said: “And if – after all the pain, all the grief, and all the evidence in this report, there are still those who think there’s no problem with anti-semitism in the Labour Party. That it’s all exaggerated, or a factional attack.

“Then, frankly, you are part of the problem too. And you should be nowhere near the Labour Party either.”

In a statement just after 1pm a Labour party spokesperson said: “In light of his comments made today and his failure to retract them subsequently, the Labour Party has suspended Jeremy Corbyn pending investigation.

“He has also had the whip removed from the Parliamentary Labour Party.”

Mr Corbyn said he will “strongly contest the political intervention to suspend me” from the party.

Labour MP Dame Margaret Hodge said Jeremy Corbyn was in “permanent denial” about anti-Semitism in Labour during his tenure.

At a Jewish Labour Movement press conference she said: “I think the statement that Jeremy chose to put out today demonstrates that he is in permanent denial about the extent of the problems that emerged during his leadership.

Even when the evidence is placed in front of him he fails really to understand the importance and severity of it.“It happened on his watch. He shamed the Labour Party. He sat at the centre of a party that enabled anti-Semitism to spread from the fringes to the mainstream.

”But, she added: “He is yesterday’s man. He is absolutely irrelevant.”

She said that under her and Jeremy Corbyn’s leadership, Labour’s processes for tackling anti-Semitism were transformed but “mistakes were made along the way”.

“Under Jeremy Corbyn’s initiative, we brought reforms to conference which were passed by Labour members and affiliates that enabled rapid expulsions,” she said in a statement posted to Twitter.

“Mistakes were made along the way, and of course I wish we could have made the reforms more quickly, although some of them required rule changes which are necessarily slow.

“But the record shows that as a result of the changes we made, Labour’s previously unfit processes were transformed, becoming more rapid, robust and more independent than any other political party.

Joe Glasman, Head of Political and Government Investigations at Campaign Against Antisemitism, said: “Shortly after submitting our complaint to Sir Keir regarding Jeremy Corbyn’s statement this morning and his past deeds, we have received confirmation that Mr Corbyn has been suspended from the Labour Party and had the whip withdrawn.

“This is a hugely significant turning point and an indicator of real change and accountability at last. We referred Labour to the EHRC precisely because it was not taking our complaints against Mr Corbyn seriously.

“Four years since our first complaint, Labour has finally begun to take action. Mr Corbyn is part of the problem, and at last our complaints against him and other sitting Labour MPs who seemed untouchable, are now being acted upon.”