Shamima Begum: Supreme Court to consider whether she can return to UK to challenge deprivation of citizenship

Post Desk : The Supreme Court will consider whether Shamima Begum should be allowed to return to the UK to challenge the deprivation of her British citizenship. 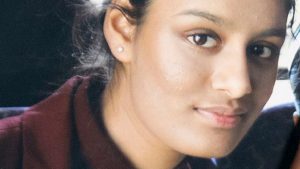 The hearing, which will be held remotely, is taking place over two days starting today.

Ms Begum, now 21, was one of three east London schoolgirls who travelled to Syria to join Islamic State in February 2015.

After the disintegration of the terror group, the former Bethnal Green Academy pupil was found in a northern Syrian refugee camp in February last year, with other former IS brides and their children.

She was nine months pregnant with her third child but all three children have died.

In February, then home secretary Sajid Javid revoked her British citizenship – a decision which would only be lawful if it did not leave Ms Begum stateless.

At the time, sources suggested the teenager, whose parents are from Bangladesh, may also have Bangladeshi citizenship.

But Bangladesh’s minister of state for foreign affairs Shahriar Alam claimed those reports were false and warned that Ms Begum would not be allowed into his country.

In July, the Court of Appeal ruled that “the only way in which she can have a fair and effective appeal is to be permitted to come into the United Kingdom to pursue her appeal”.

Ms Begum travelled to Syria with Kadiza Sultana and Amira Abase, then 16 and 15 respectively, all three flying to Istanbul before making their way to the Syrian city of Raqqa.

She claims she married a Dutch convert just days after arriving in Raqqa, with her school friends reportedly doing the same.

Kadiza Sultana is believed to have died since then and the fate of Amira Abase remains unknown.

On Monday, the Special Immigration Appeals Commission will also hear the cases of two other women, who have not been identified.

The women have British-Bangladeshi citizenship but have had their British citizenship revoke on the grounds of national security after allegedly travelling to Syria to join IS.

The tribunal will also hear an appeal from a man whose British citizenship was revoked this year after he also allegedly travelled to Syria to join the terrorist group.

All three say they were left stateless by the the decision to revoke their British citizenship, something denied by the Home Office.