Post Desk : US President Donald Trump has told his team to co-operate on the transition for President-elect Joe Biden but has vowed to keep up the fight. 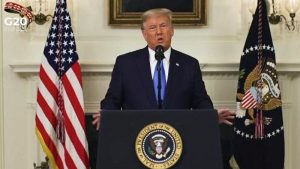 Mr Trump was defeated by Mr Biden in the US election earlier this month but has consistently refused to accept the result, claiming widespread voter fraud but failing to produce evidence.

On Monday, in a sign that he might be realising that he must leave the White House on 20 January, he said he had given Emily Murphy, head of the General Services Administration (GSA), the go-ahead to proceed with a transition for Mr Biden’s administration.

The GSA is responsible for many of the basic services that allow the US government to function, from buildings and transport management to IT, financial services, supply chains and human resources.

Mr Trump said in a tweet that his case against the election results “strongly continues”, adding that he and supporters would “keep up the good fight”.

Advertisement
But he added: “Nevertheless, in the best interest of our country, I am recommending that Emily and her team do what needs to be done with regard to initial protocols, and have told my team to do the same.”

Federal law states the GSA administrator must issue a letter of “ascertainment” determining the likely winner of the race before the transition can formally begin.

Ms Murphy, a Trump appointee, did this earlier on Monday, ascertaining that Mr Biden was the “apparent winner” of the 3 November election.

The move means that Mr Biden and vice president-elect Kamala Harris will have federal funds, an official office in Washington DC, and regular national security briefings as they head towards Inauguration Day.

She had been under growing pressure from politicians and others and had missed a Monday deadline to brief legislators about the delay in beginning the transition, which is usually a routine step between the election and inauguration.

Yohannes Abraham, executive director of the Biden transition, said Ms Murphy’s decision had given the incoming administration the “resources and support necessary to carry out a smooth and peaceful transfer of power”.

He added: “In the days ahead, transition officials will begin meeting with federal officials to discuss the pandemic response, have a full accounting of our national security interests, and gain complete understanding of the Trump administration’s efforts to hollow out government agencies.”

Senate minority leader Chuck Schumer said: “This is probably the closest thing to a concession that President Trump could issue.

“Let us all now – Democrats and Republicans, the Trump administration and the incoming Biden administration, unite together for a smooth and peaceful transition that will benefit America.”

Earlier on Monday, Mr Biden announced some key cabinet picks for his national security and foreign policy teams, a list that includes people who worked in the Obama administration at the State Department and the White House.