Late Md Azizur Rahman
Azizur Rahman, aged only 58, did not recover from a major heart attack on the afternoon of Thursday 14th October and was a very popular and respected figurehead of the community. Hence, many people came from locally, as well as, afar.
The gathering was organised by friends and family of Md Azizur Rahman along with Ward neighbours Nurul Amin, Mayz Uddin Ahmed, Councillor Faruk Chowdhury and supported by Barking Community Forum (BCF).
Present were many community elders, councillors, well-wishers and family members who expressed their shock and sadness, as well as, offer their condolences for Md Azizur Rahman and reminded people how he was a caring community personality.
Opening remarks were by Harun Miah and Imam Ammaar Domun of BCF, and along with Ward Councillor Faruk Chowdhury.
“We as a community are in a state of shock and sadness.” Said Harun.
“He was so pleased that we had purchased a property for a masjid in the area and supported us from the outset.”
“His dream was to have a mosque in Upney, and always supported me” Added Cllr Faruk Chowdhury. 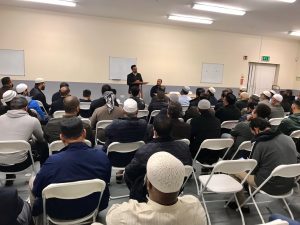 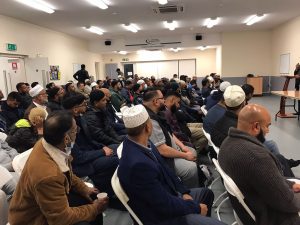 There were further remarks and condolences from many respected community elders and family members including:
Harun Miah
Imam Ammaar Domun
Saiful Alom
Anhar Miah
Cllr Faruk Chowdhury
Atiqur Rahman (brother in law)
Nurul Amin (neighbour)
Cllr Foyzur Rahman
Cllr Sadruzzaman Khan
Cllr Kashif Haroon
Shah Shahidur Rahman
Dobir Miah (friend)
Mayz Uddin Ahmed (neighbour)
Hafizur Rahman (brother)
“We all should pray for his forgiveness and the well-being of his family” said Atiqur Rahman.
The evening was brought to a closure by offering communal invocation and prayers by the imams, and some light food was shared between all those present.
Md Azizur Rahman leaves behind his spouse, 3 daughters and a young son. Their Bangladesh address is village Dampal, Gulapgonj. For any updates and transactional matters, please contact Atiqur Rahman and Hafizur Rahman.