On the evening of Sunday 16th January 2022, in front of a packed hall of the London Enterprise Academy (LEA), Commercial Road, East London, London Sportif delivered yet another successful awards ceremony, hosted by Megna Uddin. New awards were given to toddlers and children as well as women volunteers.
One clear message theme was that “London Sportif is going from strength to strength!”
Dr Zakir Khan, Head of Community Affairs, The Canary Wharf group said “we’ve witnessed an amazing success story of London Sportif. I’ve been with them from the outset and hopefully, their next phase would be to have more girls and women’s participation in sports, especially for the marginalised communities!” Similar messages were echoed by MP Apsana Begum. 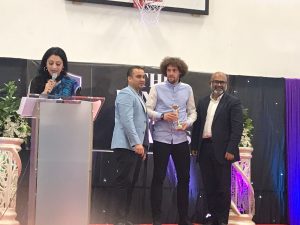 The highlight of the night was the surprised unveiling of the cricket ICC World Cup trophy won by England in 2019. Everyone present queued to take photos next to the trophy flanked by security The evening ended with a huge photo shoot with all the winners and their trophies on stage, and then a lavish three-course meal supplied by All Season Foods.
8
Shares